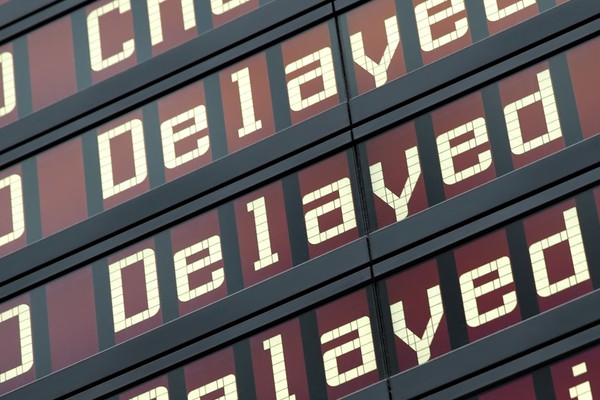 In my previous post about LBMS, I mentioned that cascading delays can cause project duration increases of 10% or more. This blog article digs a bit deeper and explains what cascading delays are, why they happen in construction projects and how LBMS controlling can help to prevent them.

Cascading delays are familiar to most practitioners. Someone does not do what they promised and they cause the next person in the production line to fail. The failures ripple through the system and get magnified with every step. If the cascading delay chain is not stopped the result is similar to train wreck and the project plunges into chaos. When developing my PhD thesis from 2005 to 20091, I noticed that the cascading delay chains can be visualized and analyzed using Flowline diagrams and I was able to quantify the impact in three projects in Finland. Based on subcontractor and Owner meeting minutes and schedule control data, I was able to describe the sequence of events and visualize it. In all three projects, one wrong decision or one failed commitment caused a chain of events that delayed the projects on average 10% of their original duration. This did not actually delay the projects because they all had a long commissioning task in the end that got compressed and was eventually done in parallel with production activities – not a good recipe for quality! All projects had minor punchlist work ongoing for a long time after “substantial completion”.

Figure 1 shows a flowline figure illustrating the cascading delay chain in one case project. Flowline diagrams have locations on the vertical axis and time on the horizontal axis. Solid lines show the planned production and dotted lines the actuals. Cascading delays where predecessors are causing impacts on successors are shown with numbers. For example, Task corridor cabling on floor 1 was suspended and finished late (1) and caused a start-up delay of vinyl floor covering. Vinyl floor covering started slow (gentler slope than planned) which slowed down electric cabling (2) on the first floor and suspended it on the second floor(3). The electricians did not return to the work immediately after floor covering completed but had a return delay of 1.5 weeks (horizontal line) The full example, including detailed descriptions of the numbered issues can be found in Seppänen (2009)1. 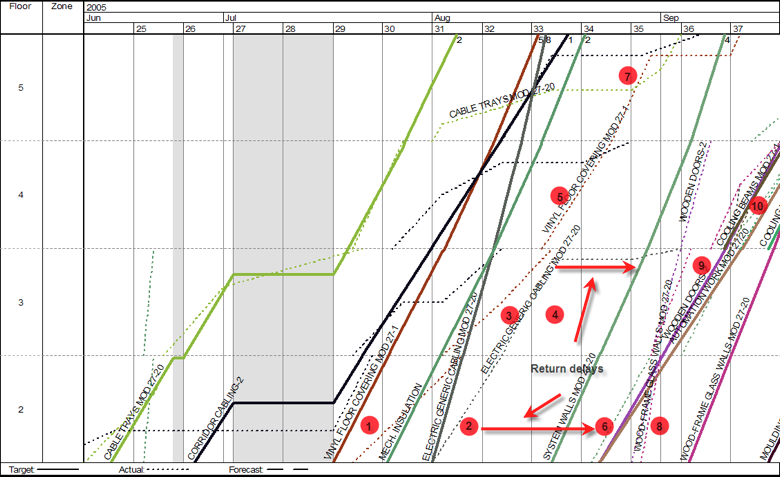 LBMS controlling system uses the historical, actual production rates to predict future problems. Alarms are generated when two tasks are going to clash in the near future. Based on empirical research, the alarm system was developed with the goal of giving at least two weeks of advance notice about production problems1. The task of production management is to prevent the alarms from turning into production problems. In practice, this is done by planning control actions. The first step is to analyze the root causes of deviations and then control actions are defined collaboratively with subcontractors. Control actions depend on the root cause but typically include accelerating, decelerating or suspending tasks, or changing the sequence. Acceleration can be done by increasing productivity by eliminating waste (the preferred approach) or by increasing resources or working overtime. Resources are added only if they can work productively. For example, it does not make sense to add resources if the root cause of slow progress is missing design! Deceleration is typically done by shifting resources to other tasks (the preferred approach) or by demobilizing crews. If a conflict cannot be avoided, one of the tasks may be suspended or in some cases it may possible to change the sequence if there is no technical dependency.

The LBMS controlling approach works best when combined with the social process of Last Planner System3,4. The combined process includes screening for constraints (using LPS methods), identifying production problems (using LBMS methods), weekly planning (using LPS methods but comparing set targets to LBMS forecasts), measuring PPC (LPS) and actual production rates and productivity (LBMS) and root cause analysis for any deviations (LPS). Using the combined process, more alarms can be generated earlier. For example, if a weekly plan commitment is less than the LBMS forecast, forecast can be adjusted to the committed level which can reveal upcoming problems before production of the week started. On the other hand, LBMS production problems can reveal issues before they become plan failures in the LPS. Regardless of the source of issues, their root causes can be analyzed. The next blog post in the series will elaborate on this connection.

On November 20th 2012, we carried out one of the largest lean gamification in the world. In total we had 630 attendees and 35 support staff. The game helped us deeply understand the concepts of Lean Construction and enabled us to grow in our experience, thinking, and behaviour with respect to the Lean philosophy. 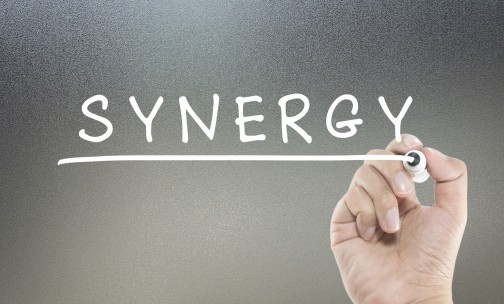 Lean and BIM Synergy in Practice – A General Overview

Exchange of Dies, refers to a method in the Lean Production System that is used for quick, simplified and efficient production set-up and changeover from one product/process to another, which often constitute the major causes of production downtime (non-productive time/stoppages). It is one of the foundational blocks of a continuous, improved production flow.

Olli Seppänen is a Professor of Practice at the Aalto University School of Engineering, Department of Civil Engineering. His field of expertise as a professor is operations management in construction. His research interests include real-time production control, location based management systems, prefabrication / modular construction and digitalized construction operations. Olli has been an active member of the International Group of Lean Construction, and was the Scientific Chair of the conference in 2015.