Building the “A” Team: Steps for an Effective Onboarding Process in LPD “How teams work matters more than who is on them. There’s a myth we all carry inside our heads, we think we need superstars. Our research showed you can take a team of average performers and if you teach them to interact the right way they'll do things no superstar could ever accomplish.” Laszlo Boch, SVP People Operations, Google [7].

Building the “A” Team is a series that I became interested in 2016 at the LCI Lean Congress. Renee Cheng’s research of IPD Projects was funded in part by Lean Construction Institute (LCI). One of Ms. Cheng’s findings was that not all projects start with the “A” team, rather, that the IPD structure encourages and supports learning that is transformational and that an “A” team can evolve [1]. This finding corresponds with a McKinsey study “The War for Talent” [2] published in 1997. The widely read study reported that a company’s culture is the most important factor in building talent.

This is especially important for designers and builders whose primary product is the knowledge, and expertise of their people. Leaders must take the time to invest in developing the project team from the beginning of the project, but also continue to sustain the effort as the project proceeds and team members come and go. This post suggests some basic steps necessary to build and sustain a high performing and collaborative team culture. In a second post, I will discuss the principles and tools to build trust and empathy through individual understanding that result in a “collective” intelligence and takes advantage of individual strengths to build the “A” team.

When a new project starts it is often assumed by the project team leads and managers, that the trades, a new designer, or a new project engineer or even an “old hand” will just know what to do, how to behave, and will fit right into the project team. As people come and go it is expected that they will produce their work with minimal instruction and understanding of both the owner’s and the project team's shared vision and values.

By not investing the time to initiate the entire project team both at the beginning of the project and as the project proceeds, the project is starting out creating a type of waste – that is, Ohno’s 8th waste of “unused employee creativity” [3, 4]. Lean project delivery has reinforced the principle that recognizes the importance of establishing a collaborative culture by acknowledging the skills, competence, and attitudes of the entire workforce on a project. Investing in building a collaborative culture and a “people first” initiative has been shown to be a primary ingredient to engender project success.

Where does full team on-boarding begin? It should begin in the initial project meeting as a project is bought out or as the design team is formed and members are briefed on the owner’s values and the project’s goals and objectives. The main purpose of the on-boarding process is to inform those coming to the project of the both, the owner’s project vision as well as the team leader's expectations of how each individual contributes to and supports a Lean culture. The onboarding message should answer the following: Why, what, and where do we want to go? Initially this is done with an onboarding manual prepared by the project leaders. The manual would begin with an inspirational introductory statement by senior project leaders stating a compelling persuasive commitment to a Lean process and the case for the Lean operating model.

Start with a Clear Plan and Goals

Onboarding documents should contain answers for questions such as, “What is the desired end state?” and “How will we measure our activities?” - Being "on time and on budget" is not enough. A complete onboarding plan should create specific metrics for productivity, quality, culture, and work life balance, and help to review the incremental progress. In broad terms, the onboarding document must define the expectations and accountability of each team member in order to achieve the project goals. Therefore, the difference between individual results and responsibilities and collective results need to be clarified.

In the beginning of team alignment, workshops and practical exercises are used by teams to develop an onboarding documents that will result in more predictability and improve project flow, but also offer the project team an understanding of team dynamics. Many resources are available to members of the LCI and published on the LCI website.

Finally, project teams have to be self-governing. The focus of the work should be on what is best for the team and the project; not the individual companies. Leaders often look to an individual as the cause of a problem and blame an individual rather than examining the system for the root cause. To avoid this tendency, leaders should identify and avoid behaviors that are considered counterproductive and do not engender productive initiatives. It is also important to coach the teams in the art of constructive conflict and passionate debate. By removing the fear of conflict and sanctioning constructive conflict, people can feel vulnerable but be assured that destructive shaming and politics are minimized. Reinforce the belief that while we are all judged and are judging we are focused on improving the system and do not allow personalizing a problem [5]. Examine the System first by asking Why 5 times.

The onboarding document should be a vital visioning document for the entire project. A primary goal of onboarding efforts are to align and unite the project team as the project proceeds. Research has shown that individuals must hear something seven times before it is understood. Therefore, team leaders must constantly remind the team of both the Owner’s vision and the Project’s goals.

Building a culture of collaboration requires ongoing reflection and evaluation. This can be done with visual graphics, videos, and other forms of communication that are conveniently repeatable and easily understood by anyone. Sharing stories about how current team members are meeting project goals, engaging in constructive conversations about roadblocks or constraints can be also helpful. This time could be called "Story Time" — Just make sure stories are not based in fiction and that people can feel safe to discuss mistakes and things that didn’t worked out [4]. Shared purposes are the guiding principles that truly motivates people. The team understands what makes the project special and what “extraordinary" means to the owner and ultimately the customer using the building.

Figure 1 is an example of a vision statement that was created by DPR Construction. It is printed in poster size and put up in the Big Room to remind the project team of the basic tenants of a Lean project. 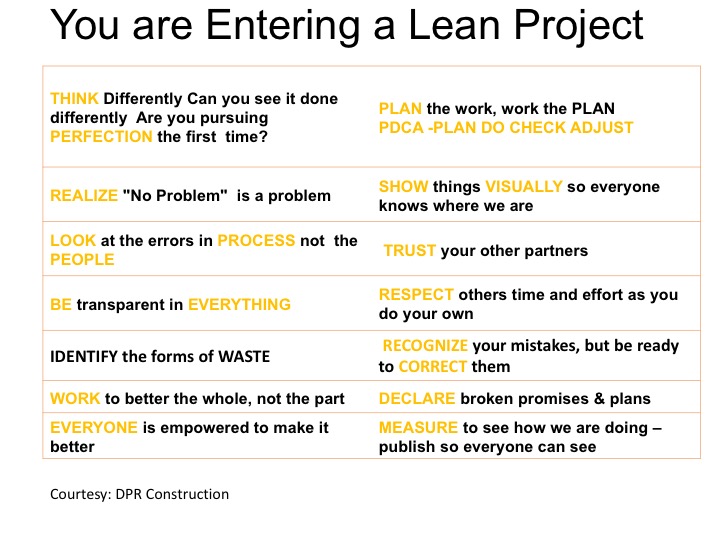 Another great example of a “vision document” that could be incorporated into an onboarding manual was created by San Francisco Airport before embarking on a major capital design and construction program. The managers of the airport developed a very comprehensive vision statement called R.E.A.C.H or Revenue Enhancement and Customer Hospitality. This document is referred constantly by staff and became an aspirational guide for SFO’s long term passenger experience [5].

The following points summarize the steps: 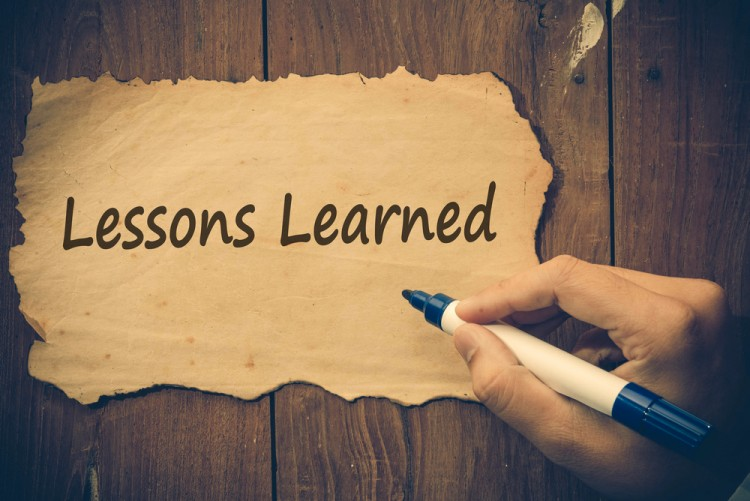 My Lean thinking has gradually evolved since beginning my journey in 2000. You'd think I’d have figured it all out by now, right?... Not a chance. I was recently asked a very good question: What would you do differently if you had all the Lean knowledge and experience you have today? Below are 10 thoughts to this question.

A highly revered ex-Toyota consultant stated that most manufacturers seem focused on achieving a 35 to 40 percent productivity gain over three to five years as a measure of success in their current Lean efforts. He went on to say that manufacturers should actually be focused on a 400 percent improvement in productivity over 10 years to achieve the path to becoming Lean. 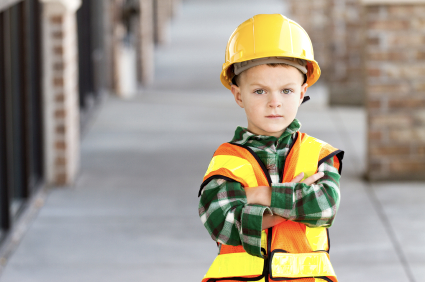 Let’s Be Kids and Continuously Improve!!

When I was a kid, I used to want to win at all costs. This is what my father taught me. They don’t keep score for nothing was the mentality. As I grew up, I have grown to accept it’s not as much about the end result as it is about the journey to get there and my daughter has reinforced this more than anything. My kid has taught me to always focus on getting better and if we don’t always reach our goal, or win, then that’s okay as long as you reflect on your progress, accept mistakes as a way to learn and to get better. I know many parents have a similar approach. 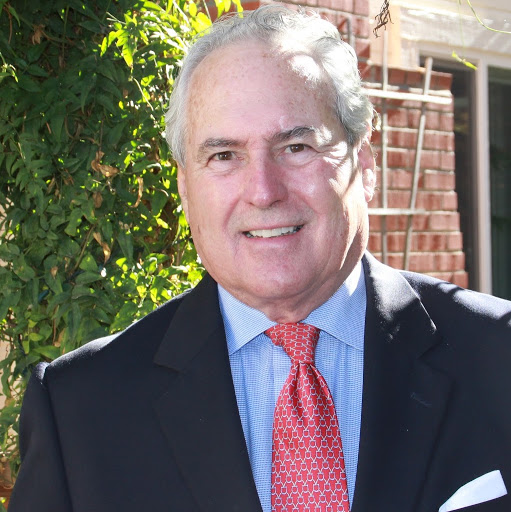 Bruce C. Cousins is a registered Architect with over forty years’ experience both designing and building great projects. He has established and directed BIM - Virtual Design and Lean Construction for Architects, Engineers and several top 100 general contractors. His specialty is Lean Design Management, coaching and mentoring high performance project teams using a collaborative project approach from project validation through design development and construction.